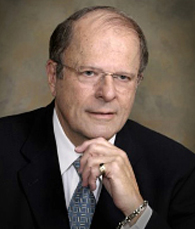 Myron Mensh has been licensed in Florida to practice law since November, 1964. A former prosecuting attorney for twelve years, Myron has devoted himself to representing people with family law issues since 1978.

Myron Mensh is rated A-V by his peers through Martindale-Hubbell Law Directory. A native-born Floridian, Myron has practiced law in the West Coast of Florida since 1964, and is now offering his services in Northeast Florida as well. Since 2005, Myron has devoted his practice exclusively to serving as a Florida Certified Mediator in marital and family law cases and in all Circuit Civil matters.

Myron received his Juris Doctor from Stetson University College of Law located in St. Petersburg, FL, on June 11, 1964. Among his many professional associations are memberships with the American Bar Association and the National Child Support Enforcement Association. He has received many professional recognitions including the Award of Merit from the National Center for Missing and Exploited Children in 1997 and a Certificate of Recognition from the Sixth Judicial Circuit Guardian Ad Litem program.

Myron Mensh maintained a private practice from the years 1964 through 2005. From 1966 to 1978, he was a prosecutor for the Pinellas and Pasco Counties State Attorney”s Office, Sixth Judicial Circuit of Florida. In 1968, he created discovery forms mandated by Florida Rules of Criminal Procedure which are still utilized by the Office of the State Attorney. From 1965 to 1967, he served the city of Madeira Beach as an Associate Judge. From 1973 to 1977, he directed the criminal prosecution for the southern half of Pinellas County, supervising eight attornies and a full support staff. From 1977 to 1978, he was a designated special assistant to State Wide Grand Jury III and the Governor’s Council for the prosecution of Organized Crime. From 1989 to 2003, Myron along with his partner were the legal service providers under Title IV-D of the Social Security Act for Pinellas, Pasco and Hillsborough Counties.